I have been adjusting more and more to Vietnam.  I am visiting sites throughout the city, from centuries old Buddhist temples to modern skyscrapers built within the past decade, this city has so much to see and so much to find.  There is so much history here.  Hanoi celebrated it’s 1000 year anniversary in 2010.  It’s impossible for me to wrap my head around that as an American, where our oldest cities are barely pushing four hundred years old.

Buddha Statue from the Vien Nien Pagoda, Built in 1014

I visited the Ho Chi Minh Museum and Mausoleum the other week.  I found the entire complex to be wildly fascinating, from “Uncle Ho’s” preserved stilt house, to the massive Mausoleum where his embalmed body lies to this day, to the distinctly pro-Russian tilt of the Museum content.  Propaganda is easier to recognize in a foreign country, and a communist one at that.  However, it seems as though Ho Chi Minh was a genuinely good leader, even through the independent research I did following my visit to the museum.  He was concerned with Vietnam’s national sovereignty, and fought whoever was required to ensure it, whether it was the French, Americans, Chinese, Cambodians, or any other nationality that infiltrated his countries soil.  I hope to continue learning more about this man who is revered with near-Godlike status in this country 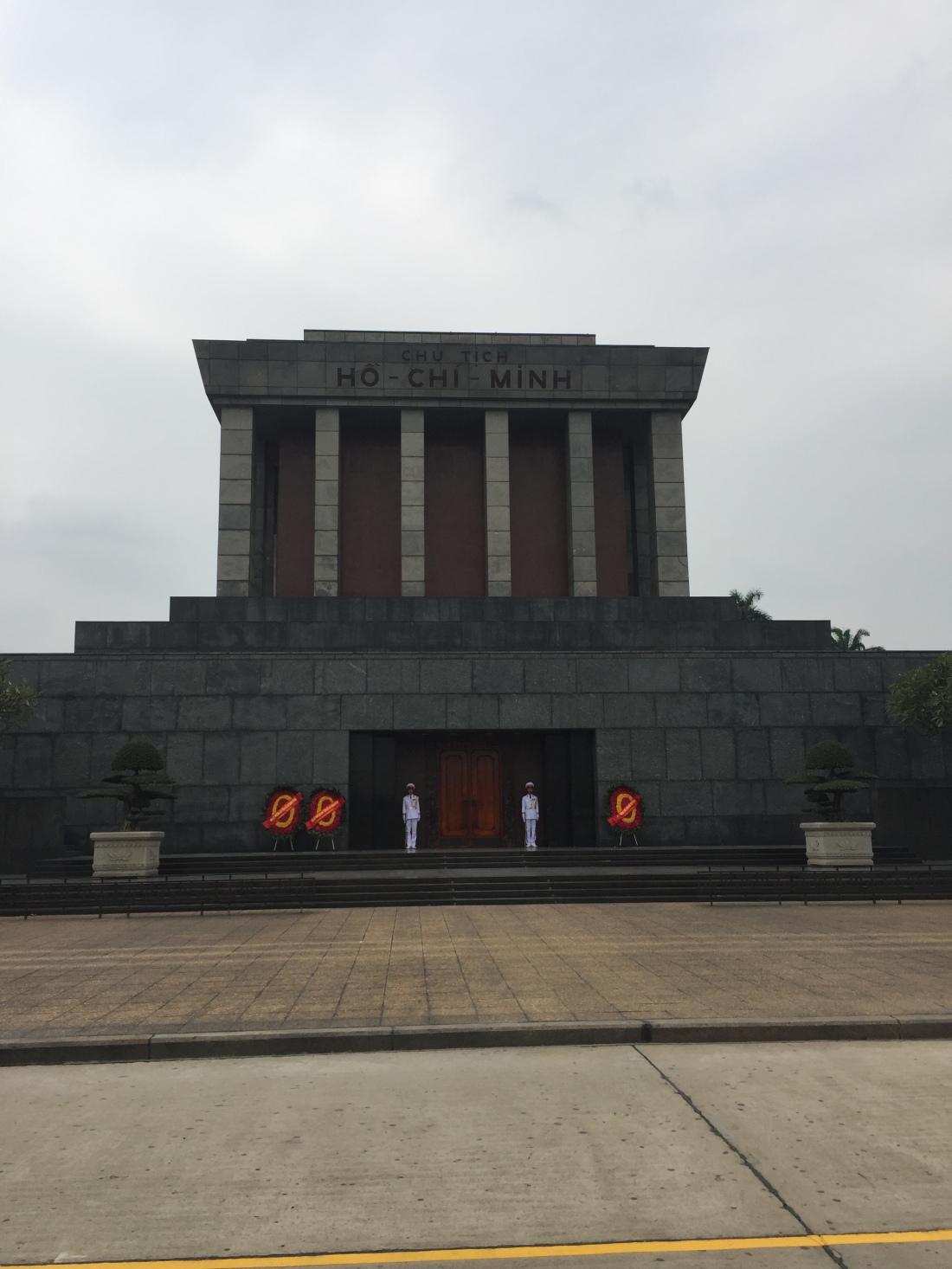 Ho Chi Minh’s Mausoleum, where the embalmed remains of the leader still lie.

I got into my first motorcycle crash last Thursday.  I was driving downtown on one of the long, wide boulevards which create the backbone of this cities infrastructure.  I was driving at about 40 km/h (around 25 mph) when a bus began merging into my lane.  Whether the bus driver didn’t see me or was indifferent to my presence on the road I don’t know, but either way, I had to swerve to avoid contact with the bus.  It was as I was moving to the right and applying the brakes that I hit a pothole which I did not see in the road.  Though I had hit potholes previously, never at speed.  I lost control, swerved sharply to the right, pitched forward, and slid.  All things considered, I was incredibly lucky.  Not only did the bus not hit me, but nothing else hit me, or got hit by my careening bike.  The only injury that remains eight days later is a banged up left knee, and a deep rip in the only pair of khakis I brought (oops).  It was not an if I was going to get into an accident, it was a when.  The main advice I’d received from fellow expats who had been in accidents previously was get out of the road as quickly as possible.  Before I even felt the pain in my wrists, hip and knees from the crash, I hopped up, grabbed my motorbike (which was leaking gas), and limped to the side of the road to lick my wounds.  I thought to myself “Well Thatcher, you’ve really done it this time…” as I futilely tried to start my motorbike, before Vietnam stepped in to help.  A sweet old lady who couldn’t have been taller than five feet walked up, helped me dust off my pants, and (somehow) started my motorbike.  She then told me (through our shared language of facial expression) to follow her, and she led me for about five minutes before we arrived at her (husbands? friends?) motorbike repair shop.  As a man went to work on my bike, she fetched a first aid kit and helped me patch up my knee and elbow.  Within ten minutes, my bike was fixed (the man didn’t want money but I insisted he take at least some) and I was rejuvenated.  The Vietnamese streets had caused me to crash, but the Vietnamese people helped me to get right back up.

The job search continues.   It was certainly not my plan to still be searching near a month into my journey, but then this plan was very loose from the beginning.  I am reassured by stories I hear from friends of how it took some of them several weeks to find jobs upon their entry into Vietnam, especially when coming in January.  Tomorrow, I am departing Vietnam for 9 days for the Lunar New Year holiday.

I am going to Cambodia.  I fly to Siem Reap tomorrow, will spend two days there touring the magical temples of Angkor Wat and Angkor Thom.  I will then travel to the south of Cambodia, to Koh Rong located in the Gulf of Thailand for four days.  While there, I will get to go scuba diving several times and live on a paradise in the sun for a price which is absolutely unheard of.  And let me repeat, I GET TO GO SCUBA DIVING IN THE GULF OF THAILAND (!!!)!  This has been a dream, a fantasy, a goal of mine ever since I first learned how to scuba dive six and a half years ago, and now it’s coming true.  After several days in the Gulf, I will board a bus to the capital, Phnom Phen.  There, I will get to visit the killing fields used by the Khmer Rouge.  Though I’ve heard it’s extremely somber and depressing, I have been told It’s a must visit and will change the way I look at many things.  I’m sure I’ll have more thoughts on that next week.

I am excited and nervous for this trip.  It feels like a miniature version of all the feelings I went through before departing for Vietnam.  It may seem silly to fret over a nine day trip just a month after embarking for a year to a distant foreign land, but this is the first time I’ve ever done a trip like this entirely on my own, including the organization part.  Instead of just asking my mom where we were going for vacation and choosing from her list of pre-approved and pre-researched activities, for this trip (obviously) that entire arduous process fell squarely on my shoulders.  I had to book flights and order visas.  I had to decode cryptic Cambodian bus and ferry schedules.  Understanding that to most of you I am just listing the more mundane aspects of planning any vacation, I am proud of the research I put in and look forward to my 9 day Cambodia getaway as my reward.

Vietnam remains challenging, and I hope it never gets “easy” to the point of “boring”.  I still need to work on being more social and expanding the limits of my comfort zone (and finding ways to push myself beyond those limits).  I need to end my honeymoon with the magical culinary gold that is Bun Cha and get back to expanding my palette.  I need to find a way to dive headfirst into the local and regional culture, expanding my world view.  And of course, I need to find a job.  These things will all come, if I make them so.  Life changing moments or lessons don’t happen on a whim or by chance, they are revealed only after moments of challenge and toil.  I have learned many lessons in the month (crazy that it’s already been a month) that I’ve been here.  Now I must apply what I’ve learned to hopefully pave the way to further discovery, both about the world and about myself.

BUN CHA.  This might be the most delicious thing I’ve ever tasted besides Flavor Blasted Goldfish and chocolate.  Made of grilled pork meat (minced shoulder meat makes the meatballs, while grilled pork belly makes the strips).  You dip the white noodles into the meaty broth, and the resulting taste blows your mind.  Sidenote: from eating so much bun cha, I am now more than proficient in chopstick usage.

Tune in middle of next week (probably around the 22nd or 23rd) for fun updates from Cambodia!  Happy Mardi Gras / Lunar New Year / any other holidays going on!

Me at the top of the Lotte Tower.  At 272 meters (nearly 900 feet), it is the third tallest building in Vietnam, but without a doubt the best view.

2 thoughts on “Crashing, Getting Back Up, Keeping Going”